An Eventful Weekend at My Mum's Place 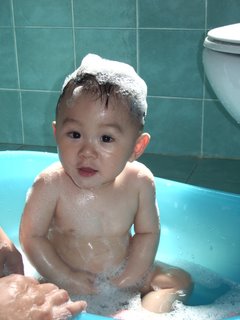 So many things happened over one weekend that I am having a hard time remembering all of them. Thomas was on a business trip over the weekend so I ended up with Gab at my parents’ house.

It was really difficult to take care of Gab alone in the house as he is really getting more mobile thus getting himself into more trouble. Usually he will sleeps till we leave from work however for the few days that Thomas was not around and maybe because of the flu he slept really early (like around 8pm) he woke up pretty early too at 7am. So I had no choice but to lug him wherever I go…..in the bathroom, next to the dressing table, near the cupboard and kitchen.

But the problem was he was always trying to stand and climb things, so I thought the walker would be safe. Wrong!!!! I placed him in the walker and to make things interesting I was playing with him for awhile before going to the kitchen to continue cleaning and preparing stuffs before I leave for work. I heard a loud ‘THUD’ and I thought to myself maybe Gab drop some of his toys that he is very fond of doing. And then I heard a cry, sensing that something was wrong….I quickly ran out and saw him sprawled on the floor looking at me and crying. How on earth did he manage to climb out of the walker. He found a way definitely. Praise God that Gab only suffered a little bruise on his left cheek.

Major milestones that I observed:

Creep (crawling on hands and knees with tummy off the floor)
It does look funny the way he was creeping but I guess he was trying to get the hang of it. But a lot of times he was moving so slow that he goes back to crawling especially when he needs to reach his ‘object’ ASAP. Impatient baby ;p.

Two Front Teeth
Yup….it is official that his two front teeth have cut through. I noticed in on Saturday which explains his continuous salivating and mouthing of things. Praise God that there is no fever though.

Stand Unsupported and Walk One Step on His Own
He can stand pretty well on his own now and even took one little step unsupported. Need to let him practice more on this when he is not so distracted by his toys.

Signing for Milk
It is official that he knows how to sign for milk. He did that quite a few times and I will put down here those times that I remembered the best.

Two weeks ago, 1 hour after feeding him milk I brought him upstairs to the bedroom for nap. We were playing for awhile on the bed when he suddenly does the milk sign. So I asked him “Do you want milk milk?” He signed again. I asked “Are you sure since you only had milk not long ago?” He smiled shyly. Just to be sure, I showed him his milk bottle and asked him again. He signed again and this time smiling. So I made him his milk and he finished 4oz in one go. That’s my boy.

Yesterday at my mum’s place after his porridge (also around 1 hour later) we were playing with his toys in the living room. He started to hug me now and then while playing with his toys as well. Then he looked at me and signed. My mum also saw it. I asked him again and he signed again. So I went to make his milk and he finished it again….150ml this time.

Vocal
I never thought that Gab can repeat after us so I never really did teach him to speak like that. I mean that I still talk to him a lot like having a normal conversation but never keep repeating some words to get him to say it out. But what happened last weekend will definitely change my approach.

Gab really surprised me each week with his fabulous achievements.

Gab is down with flu again. *sigh* Guess I should have anticipated it since Ah Soh (babysitter) granddaughter goes to nursery now and easily get infected from other kids. It is just so easy and there is no way we can avoid the spread since it is out of our control. Not only Gab but little Lydia as well. Poor thing.

He couldn’t sleep at all on Sunday night and was tossing and turning the whole night. He was so sleepy and tired and yet cannot find a comfortable position to sleep. Neither could Thomas and myself with all the intermittent crying. In the end he managed to catch some ZZZ on my shoulder. My aching shoulder. After bringing him to the pediatrician and I was so dizzy that I had to see a doctor myself and go home to rest.

The next few nights he can sleep better as we propped him on a pillow. He actually sleeps better than usual maybe because of the medicine. Did not make a sound from 9pm to 7am. That’s good as I needed some sleep myself.

Hopes that he will get well soon and God will protect him from all these diseases.

Email ThisBlogThis!Share to TwitterShare to FacebookShare to Pinterest
Labels: sick

Stand Unsupported (For 5 Sec)
It happens just last week when we are at poh poh (my mum) house. We were in the computer room aka my brother’s old home office and Gab was standing while daddy was holding on to him. Then I told my hubby to let him go and he did and Gab did stand on his own for 5 sec before breaking into laughter at his new achievement and losing his balance again. I just can’t wait to see him walking on his own.

I know a lot of people have told me that when he start working it will be more difficult to take care of him since he would not want to sit still or be carried. But aren’t all mothers happy to see their child gaining more independence and achieve great milestones as this. I know I would be delighted. No doubt that I would need to be extra careful, baby-proof the entire house and run after him, but I would not for 1 second for my own comfort and convenient wish that he doesn’t walk soon. My hubby and I will embrace it with our arms open wide.

Hold His Bottle (Without My Help)
This is a bit tricky. He did hold his bottle before when he was 3 to 4 months old briefly and then I usually breastfeed him so didn’t let him practice on bottles that much. Plus the babysitter is a super nice auntie who will willingly do it for him. So I guess he become a teeny bit lazy when it comes to bottle. Besides, I do feel that the Avent bottle is a bit too wide to hold on to.

Nonetheless he did it this week without my hand supporting the bottle. He actually uses both his hands to hold the bottle while he drinks. But I couldn’t resist some assistance when I see that he did not tilt the bottle enough to fill the teat with milk.

GD Maths Program (3 Steps Equation Problem Solving)
Like most adults who start learning maths when we are in schools, I was really apprehensive teaching my son Maths. And I am not talking about just counting 1 to 10 or so on. I am actually talking maths with all the addition, subtraction, multiplication, division, sequence and algebra. I knew I had a tough time last time so you can imagine how I feel teaching my son who is not even 10 months old.

We started the maths program 5 months ago and we did the 3 step equation last week and to our surprise and delight, he got all 3 step equations problem-solving correct. *Yippee*

We started the 4 step equation yesterday, he got it wrong. It was quite confusing because I was using the same number and repeating it 4 times……even myself got a bit confused at one time and not sure if I said it correctly. We will try again tonight and see how it goes.

Brush his teeth
He is exceptionally cute when we give him his little toothbrush and he starts putting it in his mouth and moves it from left to right. Hahahahaha. He really looks like a big boy brushing his teeth. And he will do it again when you ask him to. Guess he caught on the skill as we usually brush his teeth (or more accurately massage his gums) in the morning when he was younger. Children really learn at a lightning speed. Let’s not waste their precious time!

Email ThisBlogThis!Share to TwitterShare to FacebookShare to Pinterest
Labels: milestones

This is Gabriel's daddy! Thanks mummy for inviting me. It's been a while since I've published anything on the web. The last outburst was when I was still schooling, more than ten years ago... but that is a URL for another day.

Since mummy has been highlighting Gab's development milestones, I'll initially cover our son's physical changes, features and history. This will provide a different view of this amazing gift of God.

I'll begin from his early age (first three months) from my next post onwards, but for now, take a look at how similar mummy and Gab look. 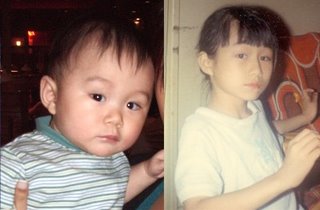 When he was younger, others used to say that Gab looks very much like me. This photo was taken when he was eight months old and you can see that he looks more like mummy instead! The only facial feature that resembles me is the nose. Ah, wise men say that you should always have a good nose... ;)

But then, every since birth, Gabriel's inner qualities have been biased towards me. He is a "cool" and mild-mannered person and poos alot. I mean, frequent and lots. Every day. :O

I'll show you more of our faces next time.

PS: Mummy, if you want to preserve this journal, better find a way to download monthly archives. Maybe view the entries by month in a browser and save them to PDF or similar.

Email ThisBlogThis!Share to TwitterShare to FacebookShare to Pinterest
Labels: photos

I can ride my tricycle Mummy!!! 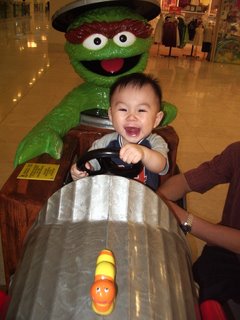 That's exactly how Gab looks as he was placed in his tricycle. Since he has grown taller now, his legs can actually touch the ground and he looks ABSOLUTELY cute using his butt to maneuver. If this is not enough to melt daddy and mummy, he even put his little hand on the back handle while he reversed his tricycle. We nearly died of laughter looking at his ‘adult’ behaviour. So much like his daddy. (The photo above is not the tricycle that we bought him - but does show how much he likes things with wheels)

We tried to video him playing the GD games i.e. flashcards sessions. Boy! What a difficult task it was. He kept looking at the video camera. So much so that we have to hid the camera behind my hubby’s black underwear which was there conveniently by the way. And next, he kept crawling away in search of his toys or be anyway except in front of mummy flashing all these cards to him. Finally we managed to go through the Maths session really fast and caught that on tape. But it is not a very clear one so we won’t be sending this one to GD…..hahahahaha. Just joking.

But I must say that he is getting good on the Math session. We are doing 2 step equations right now and so far he has been correct on all problem-solving. Not so much luck with English though. He just refused to look at the cards. Anywhere but the cards. *Sigh*